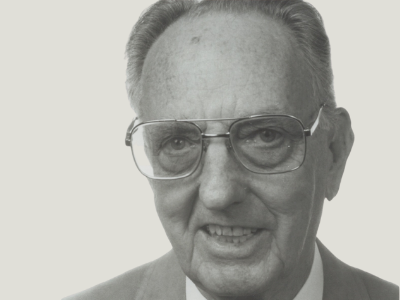 William A. Koch, known to all as Bill, was a humble man and a great leader who believed in giving back to the community and treating all people fairly.

Born in Evansville in 1915, Mr. Koch lived a long and successful life of service in southern Indiana where he made tremendous contributions to his community. A graduate of Reitz High School in Evansville in 1934, Koch went on to earn a degree in Mechanical Engineering from Purdue University in 1937 before joining the Navy in 1941 and serving during WWII. Possibly his greatest contribution came after his military service when in 1946, trying to honor his father’s mission to breathe life into the tiny town of Santa Claus, Indiana -- population 37 -- Bill developed the small theme park called Santa Claus Land and started a mail-order gift shop.

Through his honest and humble leadership, this endeavor has grown into the community of Christmas Lake Village, the development of Lake Rudolph Campground, and the nationally recognized and award- winning theme park, Holiday World & Splashin’ Safari. Today, more than 2,200 call Santa Claus, Indiana home, and his developments bring over one million people to visit southern Indiana each year.

Mr. Koch’s contributions to Southern Indiana were tremendous. Whether it was through his business endeavors or his contributions to various organizations, his visionary leadership combined with his willingness to take chances and fail in the name of progress led to countless jobs, a stable infrastructure, and legacy of holiday fun.