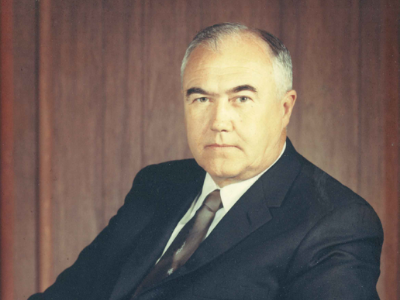 Robert Z. Morris, a true entrepreneur and native of Browns, IL, had the ability to look at something and see its value. He began delivering ice for his uncle’s business until he purchased the company at age 16. While working with his father in a small grain, feed, and seed business, which later became Morris Grain, he continued to expand the company. Seeing opportunity, he built a small facility near Evansville in 1947 and became the first to ship grain on the Ohio River. He sold Morris Grain, renamed his company Morris Trading Corp and purchased approximately 5,000 acres of land east of Sarasota, FL, as an investment. In 1967, he purchased Imperial Plastics of Evansville alleviating their financial trouble. Knowing nothing about plastics, Morris used his talent and intuition to save the business. In 1972, Morris brokered a deal with American Can that would lead Imperial into the container market. Morris sold Imperial to Mr. Jack Berry, who changed the name to Berry Plastics in 1983. Bob changed direction again and purchased the old Jackson House Motel on the Evansville riverfront. He upgraded the facility to the River House Hotel and the Sunset Dining Room, which became one of the finest in Evansville. Bob was honored for his humanity, loyalty, wisdom, and inspiration, as a recipient of the Sagamore of the Wabash from Governor Orr. Bob and wife Alice were proud to call Evansville home and worked for many years to do all they could to improve the community.