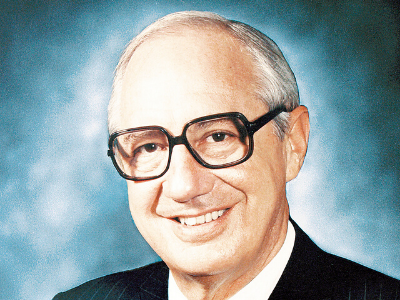 Throughout his 46 years at Old National, Dan Mitchell was renowned for his strong vision, inspirational leadership and deep commitment to community. He is most known for working to pass legislation that resulted in the company becoming the largest bank holding company headquartered in the Hoosier state.

Mitchell began his career as a credit analyst in 1950, and ultimately became bank president in 1973 and chief executive officer in 1980. He remained president and CEO until his retirement in 1994. In his retirement years, he remained engaged in the company, serving as a mentor to a number of bank leaders. He has been called the “heart and soul” of Old National – a trusted advisor and leader who set an example for others to follow.

Mitchell was equally passionate about serving the Greater Evansville community. Among the many organizations to which he devoted his time and leadership are the Boy Scouts of America, the Indiana Banker’s Association, Welborn Hospital, the University of Evansville, the Evansville Philharmonic, the Evansville Dance Theater, United Way, Junior Achievement, Habitat for Humanity, The Beacon Group, Tri-State Food Bank, Easter Seal Society, Rotary Club, Indiana Academy, United Way, and Operation City Beautiful.

A native of Phoenix, Mitchell attended Bosse High School and Evansville College before enlisting in the Army. After his discharge, he attended Indiana University. His service to Old National and the community led to his recognition as a Sagamore of the Wabash and a Kentucky Colonel.