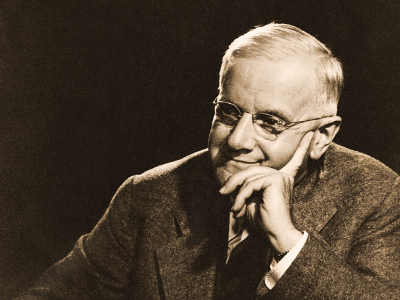 Because of the success he had found during his time at an Ohio bank, Charles B. (C. B.) Enlow was recruited by the retiring bank president to join National City Bank in Evansville. Once here, he led National City to a position of city and statewide respect. During the difficult years of the Depression, the bank never closed during normal banking hours and never missed a dividend.

As Chairman and President of National City Bank, Enlow helped other local banks survive the Depression by arranging loans for them. He also was one of the main stock holders of the Evansville Courier and the Evansville Printing Corp. According to granddaughter Susan Enlow, he was a man who never sought power, but did aim to make others powerful. If a business owner needed something done, he went to Enlow. He made loans, and then made sure the business was successful.

Enlow was a long-time member of the appointed Evansville School Board. He was instrumental in the construction of several area schools, and was a leader in the fight to start high school boy’s sports as a way to increase the graduation rate. Outside of education, Enlow served as Evansville’s Civil Defense Director during World War II, and held many directorships including a seat on SIGECO. Enlow Field at Bosse High School is named after him, and he was honored in 1942 with the Evansville Rotary Club Civic Award.