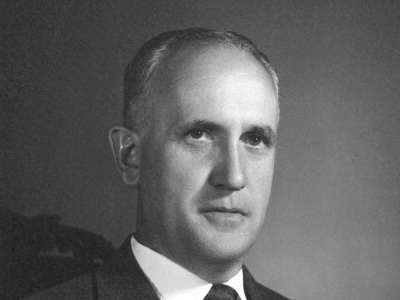 Kenny Kent is remembered as an exceptional businessman, civic leader, entrepreneur, visionary, and humanitarian. He began working as a copy runner at age 15 for the Evansville newspaper. After graduating Central he went to work at Wolflin West Side Lumber Company and eventually acquired Wolflin. Kent founded Kenny Kent Chevrolet in 1951 and later added Mazda, Volvo, and National Car rental franchises. He also co-owned the Evansville and Henderson Holiday Inns and had investments in Royal Crown Bottling Works, Wendy’s, Rotherwood Apartments, Franklin Bowling Lanes, and Windsor Plastics. He was a founding member of Oak Meadow Country Club and Little League Baseball.

Kent was involved in many civic projects beginning in the 1940s. He led capital campaigns for the Evansville Museum, the University of Evansville, Carson Center, Roberts Stadium, Evansville's Future, the Salvation Army and the Red Cross. His local boards included The University of Evansville Board of Trustees, Citizens National Bank, Credit Thrift of America, Salvation Army, Red Cross, Evansville Airport Authority, Evansville Country Club, and The Evansville Auto Dealer Assoc. Nationally, he was Chairman of the National Automobile Dealer Retirement Trust (17,000 members), Indiana State Director of NADA and Past President and Director of Indiana Automobile Association. Kent, a humble gentleman with an infectious smile, received many professional awards during his lifetime, and his lasting mark on Evansville was his genuine interest in working with organizations to move Evansville forward. “He believed that giving back was the rent one paid for the opportunity to live and show appreciation for one's community."