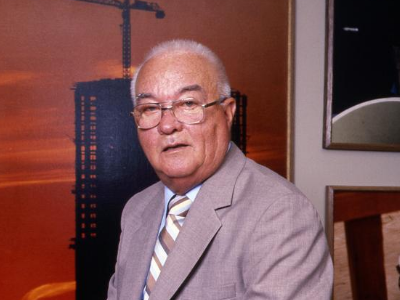 Charles H. Braun Sr. was well-known and well-respected throughout the business community. He started his construction career as a water boy for Hoffman Construction shortly after he graduated from Memorial High School. He worked his way up to General Superintendent. He left there to become vice-president of Traylor Brothers. He bought Industrial Contractors in 1964 and grew it to one of the nation's top construction companies. As chairman of Industrial Contractors for more than 30 years, Braun's leadership and decisions were the inspiration and driving force for taking a $3 million business and transforming it into a $470 million operation. Industrial was ranked as high as 163 in the ENR TOP 400 Contractors in the nation. Industrial would continue to thrive after his retirement under his sons' guidance. Industrial sold in 2011 to Skanska USA Inc.

Braun could get things done! Industrial was a leader in industrial and commercial projects. Braun hired the first minority carpenter apprentice in Evansville. He strongly supported and invested in Downtown Evansville development. Braun and his family strongly supported the University of Evansville. The university's baseball stadium was named Charles H. Braun Stadium. He was a director of Old National Bank, a member of the United Way, Knights of Columbus, Peaceful Brothers, Kennel Club, Evansville Country Club, and Petroleum Club. He served on the board of the Associated General Contractors. He was married for almost 63 years to his wife, Margaret, who was his partner in almost every endeavor. They had two sons, Charles Jr. and Alan.